Bagnara Calabra. On the tip of the boot.

In the heart of Costa Viola, one of Calabria's most beautiful stretches of coastline, Bagnara Calabra embraces the Tyrrhenian sea with bleach-white beaches that gently descend into the cobalt blue water which takes on a purple hue at sunset. Rising up behind Bagnara Marina, the town's centre alongside the sea, are the rocky Aspromonte slopes interspersed by the traditional terracing on which vineyards are cultivated.
On the ancient paths that weave their way up from the areas of Marinella and Canneto, one can reach the upper part of the town and the Marturano headland upon which the bastions of Palazzo Ducale Ruffo stand, the castle that was rebuilt following the devastating earthquake of 1908. The historical centre, particularly the Porelli area, is a succession of churches and buildings that recount the town's long history, for example the Torre Aragonese (or Ruggiero) tower, and of views overlooking the sea with Sicily and the Aeolian Islands providing the backdrop. A little out of town, the Villa De Leo dominates the rocky outcrop with its colourful mosaic flooring and elegant Art Nouveau windows. Popular for its beautiful beaches, Bagnara Calabra has many other treasures to offer its visitors, such as a variety of wonderful natural caves, it's also a veritable paradise for nautical tourism and for lovers of underwater fishing.

Bagnara dates back to the Phoenicia, the civilisation from which swordfish fishing appears to have descended and which, together with tuna fishing, constitutes the principal occupation of its inhabitants. Naturally therefore, the area's specialities include dishes based on these and other fish, as well as torrone (Calabrian nougat) and zibibbo dessert wine. 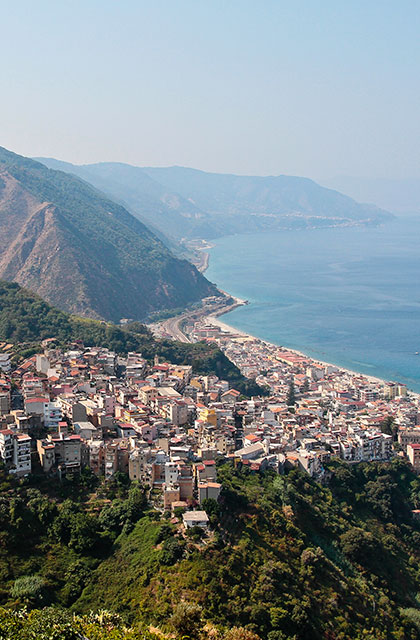