Since 1985, Don Camillo restaurant in Ortigia has held up the name of Sicilian cuisine of excellence.

The heart of the Mediterranean has a name, Sicily. And this name has a beautiful accent, Ortigia.

Among the narrow streets of the Syracusan island is the Don Camillo restaurant, a true excellence of Sicilian cuisine.

The restaurant was opened in 1985 by the current owner Giovanni Guarneri and his father "Don" Camillo - who gave his name to the restaurant as a symbol of hospitality and home feeling, which at Don Camillo is rather palatable.
Don Camillo is a real wine cellar. The walls are white Syracuse stone, the vaulted ceiling and the smooth stone floor. The setting is completed by a conspicuous and remarkable selection of wines, local and not.

The people, cultures and influences that have been in Trinacria have made the Sicilian cuisine a real fusion cuisine which is now celebrated on the menu of Don Camillo. The raw materials of the island are highlighted by the traditional cuisine - first in Syracuse, and in Sicily - innovated in techniques, presentations and combinations that make dishes lighter.

Among the excellences of the Don Camillo menu we recommend "Spaghetti delle sirene", proposed with a shrimp and sea urchin sauce, sprinkled with parsley and garnished with raw sea urchins, and the "Noto almond cream with prawns in black crust ”, made with almonds cooked in broth of shrimp shells, with shrimps dipped in a batter prepared with cuttlefish ink bag, then fried and served on warm almond cream.

The authentic signature of Don Camillo is represented by its original dishes, specially designed to match the dish they want to serve and made by the artisan Thalas di Modica. One example is tuna steak with bell pepper jam which has four recesses for the sauce and jam. 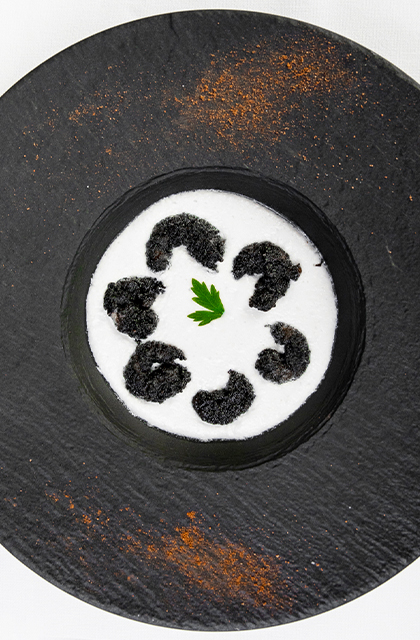