Alatri, in heart of Ciociaria one of the beautiful arts towns in southern Lazio

Alatri, set on the slopes of the Monti Ernici mountain range, proudly and austerely dominates the surrounding landscape. The city was established by the Hernici, an Italic tribe of ancient Italy, after that it successively became Roman, episcopal, a free commune, under the dominion of the powerful Conti family and part of the Papal States. Today's Alatri is a mirror image of this history: a symbiotic and perfect coexistence of ancient architecture and that which typifies successive eras, at once stupefying and fascinating for all who arrive here. A compact and unconquerable city wall welcomes the visitor, through which access is only possible at the few original openings. Like Porta Maggiore, with its imposing monolithic architrave, or Porta Minore, where upon the remains of pagan temples the Bishop’s Palace and the Cathedral were built, the latter of which today still enshrines the host which miraculously became flesh in 1227. As well as the city wall there is a plethora of other archaeological and medieval remains to enjoy: Palazzo del Cardinale Gottifredo, a Romanesque building that now hosts the Museo Civico Archeologico (Archaeological Museum), the Chiesa di Santa Maria Maggiore and Chiesa degli Scolopi churches, Fontana Pia (a fountain) and Palazzo Conti. A variety of cultural and folklore events bring the village to life during the spring and summer. One of the most popular is the infiorata, which entered the Guinness World Records in 1999 for the longest uninterrupted floral carpet in the world.

Taking centre stage in Alatri's restaurants are the local recipes from Ciociaria where a variety of shapes of homemade pasta is the order of the day, such as the cecapreti, ﬁni-ﬁni or maccaruni, often served with tomato, ragù or mushroom based sauces. “Garofolato” and ”abbuoto” are meat dishes that are well worth a try, the former is castrated lamb with cloves, garlic and herbs, whilst the latter is a sort of roulade with lamb offal cooked with herbs and made into a kind of sausage using natural casings. 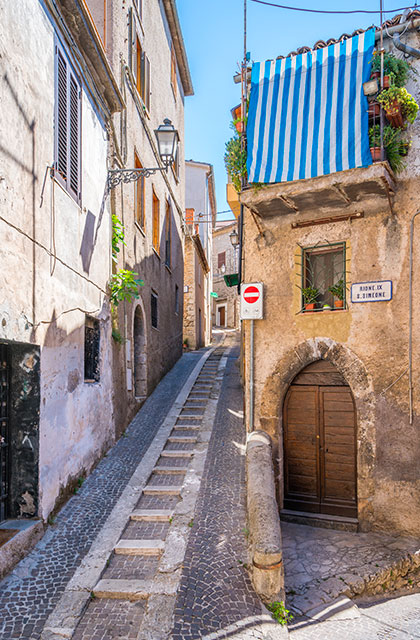