Caffetteria Torinese, the star of Palmanova.

The enchanting Friulian town hosts what has twice been named the best coffee bar of the year.

The plan of each city tells a lot about the city itself. Milan radial planning was due to the construction of canals used to transport marble for the Duomo. The grid plan of Turin shows the typical Roman urbanization of the period when the capital of Piedmont represented one of the most important limes of the empire. Palmanova, on the other hand, has a very curious nine-pointed-star-shaped plan, a legacy of the Venetian defense fort that the Friulian city used to be in the 16th and 17th centuries. Hexagonal the Piazza Grande square is found right in the center of this star-shaped town with a local symbol, Caffetteria Torinese.

Here is the story behind its name. Caffetteria Torinese was founded in 1938 at the behest of its two lady shareholders coming from Piedmont rather than from Turin; this small detail, however, was not of importance at the time as the citizens would “hang out at the Turiners’ coffee bar”. When the actual owner took over the venue in 1995, he decided to keep its original name.

The new Caffetteria Torinese maintains all the distinctive traits of an Italian coffee bar such as a long counter that shows a selection of delicious pastry, plus enhanced catering elements. At the back, in fact, you access a room where its personality decorations, classic furnishings, and design details merge in a modern and impressive style.

Great attention to quality, seasonal products, and the territory have always been distinctive and rewarding elements of Caffetteria Torinese. In 2010 Gambero Rosso awarded it the “best bar” prize, re-confirming its decision in 2014.

At this time of the year (November) the menu offers Autumn Octopus you mustn’t miss, cooked at low temperature, seared and then served with seasonal vegetables such as pumpkin and chestnut and garnished with a light, non-spicy radish cream. Yummy to the palate and eyes.
The choice of water to serve here fell on Millennium Water - Antica Fonte della Salute. The owners discovered it in some of the most prestigious venues in Venice and were impressed both by the design of the bottle and by the utmost excellence and refinement of its content.
Cities evolve, change, renew, but always do it around fixed points. And Cafeteria Torinese is one of them for Palmanova. 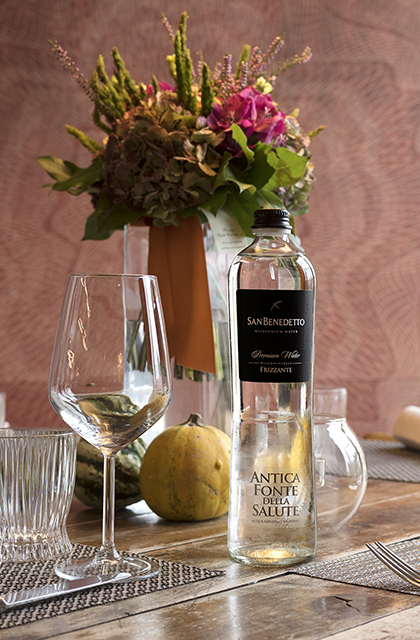