Sat right at the top of a hill between Lazio and Umbria: a place where time has stood still

A red-tinged town perched atop a hill. The view that loses itself in the gullies, in the surreal silence that seems to engulf everything, even the land. And that's exactly what is happening in Civita di Bagnoregio. Located on the border with Umbria, near the Tiber Valley, this minuscule village officially counts 16 inhabitants and the only way to get to it is over a reinforced concrete bridge. The exodus started towards the end of the 19th century due to the village's precarious natural predicament which has condemned it to an inevitable destiny: earthquakes, landslides and clayey cliffs being rendered unstable by water and rain are progressively dragging the village into the valley below. A sad end which, nevertheless, adds charm to the already beautiful Civita and attracts hundreds of thousands of tourists from around the world every year. Its current appearance dates back to the end of the Middle Ages and is almost entirely intact, with medieval buildings embracing alleyways in an intertwine of roads climbing up to the bell tower at the top. The village's hidden corners and roads also take us back to its Etruscan origins, to a past marked by the Goths, Longobards and by the Papal States. The beautiful aristocratic mansions of the Colesanti, Bocca and Alemanni families bear witness to the flowering of the Renaissance.

Although just a few people live in Civita today, it is still possible to stop off at one of the village centre's delightful restaurants and taverns to taste the typically Umbria Lazio cuisine, with pork dishes, sausages and cured meats, truffles, mushrooms and the acclaimed extra virgin olive oil. The village's traditional signature dish is an absolute must: fettuccine pasta with a sauce made with chicken innards. 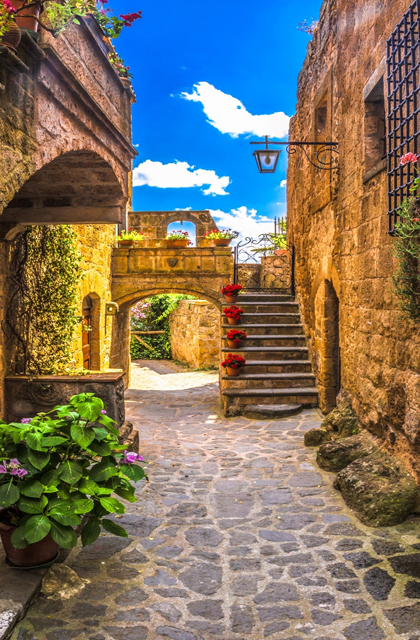