Colle di Val d'Elsa, the village with a view

A pearl of history set amongst the rolling Chianti hills

Colle di Val d'Elsa, a land of rolling hills, traditional flavours, history and customs, is a medieval village with a little dash of Renaissance perched atop a small hill midway between Florence and Siena. Traces of its existence date back even as far as the 10th century, when its strategic position led to it becoming involved in conflicts and wars between the Guelphs and the Ghibellines. At the end of the 12th century the village started to develop into a free commune, but it only found peace with the Unification of Italy which formalised its status as being part of the province of Siena. Colle di Val d’Elsa's most ancient quarter is perched upon a lofty knoll and the surrounding narrow valleys divide the town into three parts, which originally formed three independent villages: Borgo di Santa Caterina, Castello di Piticciano and Piano. One of the architectural oddities of Colle di Val D'Elsa is provided by its tower-houses, which contribute to giving the town a rather unique outline. Those still standing include the tower-house of Arnolfo di Cambio, where the artist was born around 1245. The Baluardo is also nearby, a defensive bastion situated at the extreme end of the castle and which dominates, with its imposing stature, the valley below as well as the breathtaking Chianti hills. A state-of-the-art lift was opened in 2006 to connect the town's lower quarter to the top of the hill, making it possible to quickly go up the more than 40 metres necessary to reach the Baluardo and from there the Castle. Once on the hill you can't help but look out from the wonderful terrace to take in and admire the breathtaking view of the lower part of town, the Tuscan hills and the surrounding countryside beyond. Immediately behind the Baluardo stands the beautiful Palazzo Masson, built at the end of the 19th century in the precise spot where the Porta al Canto once stood. Other unmissable gems are the Piazza del Duomo with its historical buildings, the Museo Civico di Arte Sacra (Civic Museum of Sacred Art) which is housed within the sumptuous Palazzo dei Priori, and the Museo Archeologico (Archaeological Museum).

Sitting down for a meal in Chianti means treating the palate to a triumph of flavours and colours. You simply have to kick off with a platter of cured meats with capocollo (cured pork neck/shoulder), finocchiona (fennel flavoured salami) and buristo, a large pork sausage flavoured with raisins and pine nuts. You're spoilt for choice with the first courses too: the most traditional type of pasta found in the province of Siena are pici, handmade thick rustic spaghetti made with water, flour and olive oil, often served with pork or wild boar ragù. Meat lovers will feel like they're in heaven with the wonderful grilled meats on offer, washed down with a lovely bottle of Chianti, perhaps the Colli Senesi variant, to be followed by a traditional dessert such as a canticcio (almond biscuit), a ricciarello (almond cookie) or a slice of panforte (chewy cake with fruit and nuts). 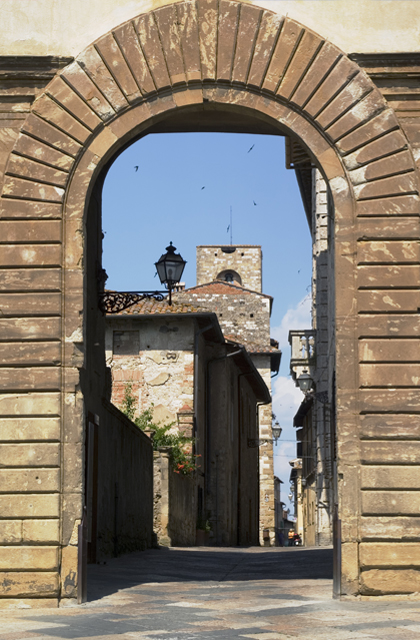