La Pigna and the forgotten treasure

A setting rich in mistery and beauty

La Pigna, the medieval heart and original town centre of Sanremo, a place of ancient backdrops and secrets. This hamlet within the city of flowers is an ode to beauty: narrow, bare stone alleyways, dynamic flows of rampant arches between the houses, itineraries to be discovered on foot and a magical atmosphere. It's like living in an enchanted world where time and life move to a different rhythm, punctuated by the alternating colours of the air and the land.
The entrance to the hamlet is marked by the imposing stone arch of Porta Santo Stefano, dating back to the 14th century and separating it from the rest of the town.
The houses swirl around to form the shape of a pine cone, hence “a pigna”, and contain forgotten treasures such as the Cartelami in the oratory located in piazzetta dei Dolori. They are devotional depictions of religious scenes made of simple material (cardboard), a traditional 17th century Ligurian production technique which is no longer practised.
Whilst strolling along the alleyways it's not difficult to come across a variety of curious names, such as Porta Bugiarda (Deceitful Gate) or Porta della Tana (Burrow Gate), in homage to when the town stood to defend the Saracens.
In the covered passageways a playful exchange between light and shade leads us to the magnificent gardens dedicated to the beauty of the Queen of Montenegro, where one can rest amongst the palm trees in a green oasis and gaze out towards infinity. To finish, it's well worth climbing all the way up to the Santuario della Madonna della Costa, with its unmistakable cupola, easily visible from both coast and sea, it's been a reference point for sailors since ancient times.

Traditional dishes include “sardenaira”, soft focaccia with tomato sauce, capers and anchovies, “torta verde”, a savoury pie with rice and courgettes, and the “brandacujun” dried cod, creamed with potatoes and parsley. 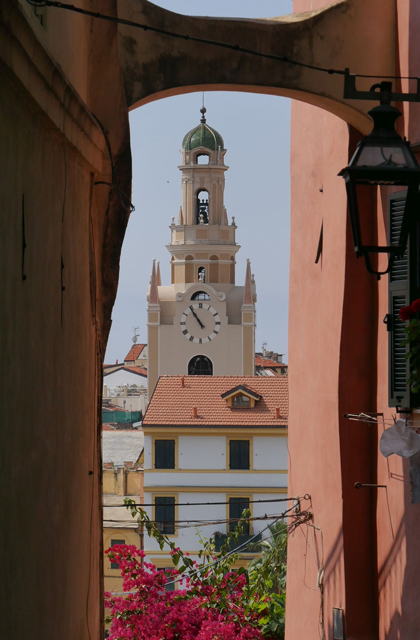