Lecce an ancient city at the gates of the Salento region

Lecce, the “lady of the baroque” offers features unique in the world

Situated on the sunny Salentine peninsula occupying the southern tip of Apulia, Lecce is a gaping window to a little corner of the world that is passionate, welcoming, full of life and brimming with art and history. Commonly nicknamed the “Florence of the South” due to the wealth of its monuments and the beauty of its narrow central streets, this ancient city is an open air museum that invites the visitor to discover traces of various eras and peoples, from the Messapians to the Normans. The most interesting and best preserved Roman remains include the Roman amphitheatre and the Palmieri hypogeum, dating back to the 2nd and 4th centuries respectively. However, it is since the 1500s that Lecce has acquired its current complexion to become the ultimate symbol of a unique and peculiar style, Lecce baroque. The richness of the decor is expressed in the carved masterpieces on the façades of the churches and 17th century buildings, imaginative, complex adornments made possible by the local stone, particularly soft and white and known as “Lecce stone”.
This perfect combination allowed master stonemasons to produce the beautiful carvings of the Basilica di Santa Croce, the Colonna di Sant’Oronzo, and the Cattedrale di piazza Duomo.

DLecce is the place to savour Salentine cuisine. This tradition's most popular dishes include Ciceri e tria, a pasta dish with chickpeas, Municeddhe, small land snails, and Turcinieddhi, roulades made with the innards of lamb or young goat. Of the desserts the pasticciotti are an absolute must, delicious little filled pastries made with shortcrust pastry and fresh custard.
The region offers an array of excellent produce, including olive oil and locally produced wines from indigenous grape varieties, such as Negramaro and Primitivo. 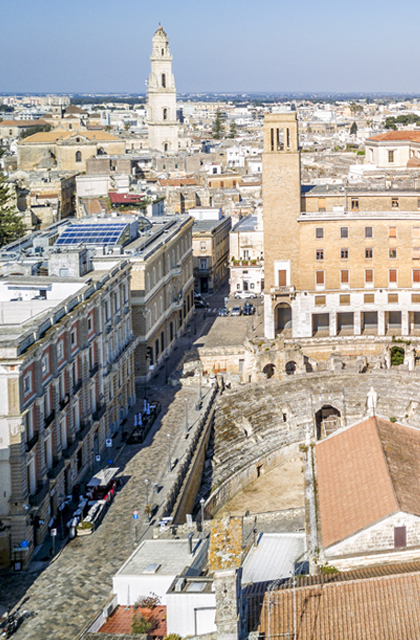