Santa Tecla. A place of ancient charm just a stone's throw from Catania.

Santa Tecla, the allure of an unforgettable explosion of color

Situated twenty kilometres north of Acireale, on the stretch of Sicilian coastline known as the Riviera dei Limoni, stands the ancient village of Santa Tecla. This village, documentary evidence of which dates back to the 13th century, is located at the foot of the La Timpa nature reserve, a low headland formed of stratified volcanic rocks that embraces Acireale's inland area and underlines the closeness of Mount Etna. The position offers a breathtaking view across the territory where an array of colours alternate between rugged black rocks, the dense vegetation's green faults and the magical blue of the sea. Perched on the rocks, Santa Tecla is visible from the sea thanks to the Scalo Pennisi watchtower, a small square tower with a pyramid-shaped roof which was built in the 16th century to protect the village from raiding pirates. The tiny village centre, with its handful of narrow lanes, is inhabited mainly by fishermen and comes to life during the summer whilst managing to maintain its authentic character. Each year hordes of worshippers and tourists flock to Santa Tecla to visit il Santuario, a unique, surreal open-air place of worship which is set within an attractive garden and is consecrated to Our Lady of Fátima.

Santa Tecla is the place to come to savour the delights of Catanian cuisine, bursting with Mediterranean flavours and smells. A diverse symphony which brings incredible freshness to the table, from starter to dessert. Arancini, caponata, pasta alla Norma or pasta alla carrettiera, all unmissable dishes that originated from this part of Sicily.
Other specialities include the myriad of treasures produced by the sea, as well as cannoli or an ice cream for dessert. 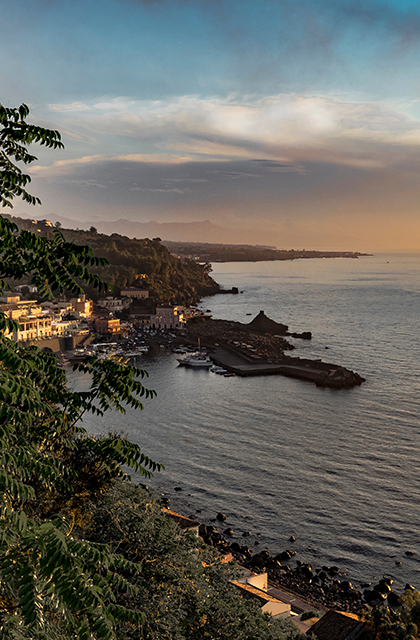