Sferracavallo, on the road to the sea

Where Palermo's ancient fishing tradition is still cherished and celebrated

Sferracavallo, a small fishing village to the north west of Palermo, is enclosed by Capo Gallo, at the foot of the nature reserve from which it takes its name, and Isola delle Femmine, named after the tiny island emerging from the sea just offshore, and that is also in a protected area. The centre is arranged around the Calandria, an ancient tuna fishing factory from the 1400s which survives today to testify to a past when fishing was the only way for the inhabitants to make a living.
A number of archaeological findings of pottery and animal bones demonstrate that this area has been inhabited since prehistoric times, when tribes used the surrounding caves for shelter. These caves were formed due to the calcareous nature of the rocks, some of them can only be reached via the sea and have created precious ecosystems which are inhabited by different forms of flora and fauna. The most renowned are the Impiso cave, which means Hanged in local dialect, and the Olio cave. Sferracavallo took its name from the road which used to link it to Palermo, a road so heavily rutted that the horses walking on it would lose their shoes (Sferracavallo literally means to unshoe a horse), a situation that wasn't rectified until 1750.
Immersed within a breathtakingly beautiful setting, the village is today a very popular tourist destination and offers visitors some of western Sicily's most picturesque beaches, with Barcarello being a particularly stunning example.

Despite the fact there aren't many fishermen left in Sferracavallo, the cuisine is still
typically Mediterranean offering many varieties of fish. The local specialities include many simple recipes, such as pasta with sea urchins and dishes with mussels, clams, octopus, smooth clams and oysters. 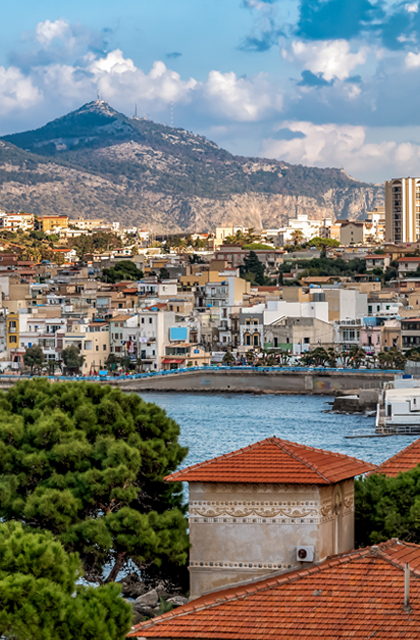