Siena, the colour of history

The elegance of a timeless place

Having remained untouched since the Middle Ages, Siena is a magical place, a unique journey through time set amongst rolling Tuscan hills, majestic buildings and never forgotten traditions.
In the collective imagination, Siena is Piazza del Campo, considered to be one of the most beautiful squares in the world with its characteristic sienna colour creating uniformity between the palace façades and roofs and transforming them into a unique trademark. Ever since the 14th century, Piazza del Campo has always been the centre of city life in Siena, with its markets, festivals, jousting and, of course, the Palio. Its unique shell-like shape, consisting of 9 segments, along with its gentle slope welcome the many visitors who sit here to gaze at the sky framed by the profile of the surrounding buildings. One of which is Siena's Palazzo Pubblico, one of the most beautiful public buildings in Italy. Its magnificence aroused so much wonderment that it was taken as the model to be followed for all the other buildings that were subsequently built around the Piazza. A 'must-not-miss' is also the Fonte Gaia, the city's largest fountain, the original version of which was decorated by the sculptor Jacopo della Quercia. The ancient restored Fonte can be seen in the Santa Maria della Scala Museum. It's also well worth taking on the arduous 88-metre climb up the Torre del Mangia (Mangia Tower): from where you can admire the entire Piazza, the Duomo and the surrounding hills. Legend has it that the tower owes its name to its first keeper who was nicknamed Mangia guadagni (Earnings eater), due to his habit of spending all of his money in taverns and enjoying life to the fullest. The Duomo is another unmissable treasure, with its contrasting black and white façade. And it isn't just beautiful on the outside: a visit inside the Duomo will reveal its stunning floor, embellished with esoteric symbols and religious narrations, the Libreria Piccolomini (Piccolomini Library) and Cappella Piccolomini (Piccolomini Chapel), where between 1501 and 1504 Michelangelo sculpted the four statues located in the lower alcoves. And if you keep getting lost amongst the climbs and descents of Siena's myriad of narrow alleyways, you might get a bit tired but all its historical and traditional splendour will repay you in full.

Siena is immersed within a land that produces exceptional products: olive oil, pork and beef, game, vegetables, herbs and, of course, wine. You can't just ask for a bottle of Chianti in Siena, because some of the most famous wines in the world hail from its surrounding hills: Brunello di Montalcino, the absolute master, Nobile di Montepulciano, Vernaccia di San Gimignano and, naturally, the unmissable dessert wine, Vinsanto. Sienese cuisine is simple but it compromises on nothing, its strength comes from its respect for tradition: a clear example of which are the mixed crostini, accompanied with pecorino cheese, honey and every possible kind of cured meat. Also of great renown is ribollita, a triumph of vegetables whose name is inspired by the way it's cooked: the dish is cooked the day before, but before serving it is warmed up with a ribollita (a reboil). We also mustn't forget pici (thick rustic handmade pasta) and pappardelle with wild boar or hare ragù and finally the desserts: cantucci (almond biscuits), ricciarelli (almond cookies) and panforte (chewy cake with fruit and nuts) made with almond paste, nutmeg, marzipan and citron, with its delightful smell, definitely made in Siena. 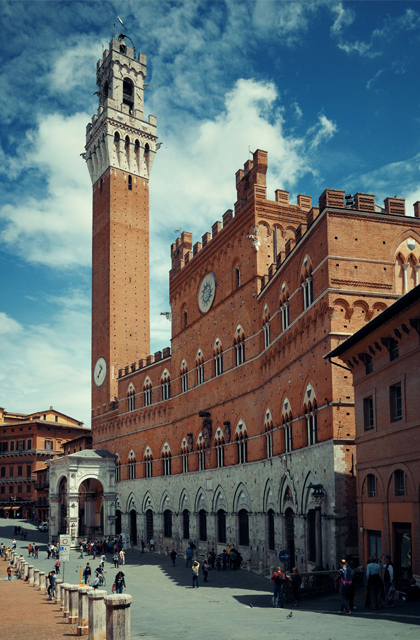