Spello. An enchanting "most splendid colony".

Spello, a town with a fragrant history

Spello in Umbria is home to an abundance of pink houses, churches and historical buildings which bear witness to its long Roman and Lombard history that was bitterly contested by Popes and nobles. Spello was considered so beautiful that in Roman times it was known as the "most splendid colony Julia". Still standing proud as a reminder of its distant past are the fortified Roman walls and three magnificent gates to the town: Porta Urbica, Porta Consolare and Porta Venere, with its two beautiful twelve-sided towers. Anyone keen on local history should visit Spello during the Infiorate, held every year in May or June to celebrate Corpus Christi, when artists and residents decorate the streets of the town centre with pictures of sacred art using flower petals. The highlight of the event is the huge carpet of flowers that stretches a mile and has earned Spello the title of the "capital of flowers".

Spello is famous for its legumes which can be enjoyed on a bruschetta with delicious Spello oil or in soup: there are many specialties to choose from, but the most popular are 'risina', a variety of bean without the characteristic black eye, chickpeas and 'cicerchia', a legume with very ancient origins that is excellent in both salads and soup. 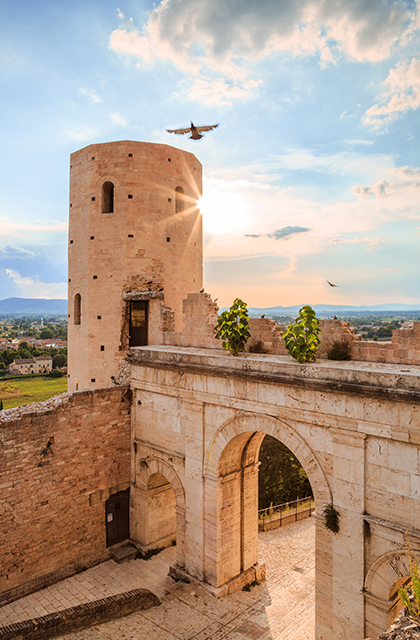