Sperlonga. A treasure trove on the Mediterranean.

Perched atop a rock spur plunging into the Tyrrhenian Sea, Sperlonga is one of the most charming fishing villages along the Pontine coastline. The heart of the village is an absolute gem just waiting to be discovered by wandering through its winding alleyways, overlooked by tiny arches and interspersed with steep stairways. The whitewashed houses, with their joyfully coloured balconies, emblazon the village with an array of light and colour and create a typically Mediterranean atmosphere.
The landscape offers an unforgettable view across the most crystal clear waters of the Lazio coastline and is dominated by Torre Truglia, an imposing watchtower erected on the extreme point of the headland. This tower is one of four that were built in the 16th century to help defend against the Saracens, three of them are still intact, however Torre Truglia is the best preserved and is the one which separates the western and eastern coastlines. The beaches have superfine white sand, a coveted destination for tourists but also for history enthusiasts who come here to admire an extraordinarily beautiful archaeological site.
The evocative remains of the Villa di Tiberio are located at the far end of the Spiaggia dell'Angolo beach, close to a natural cave - or spelonca in Italian - from which the village takes its name.

Sperlonga is the home of Mediterranean Pontine cuisine, with its incredible variety of dishes and the ability to combine flavours from both land and sea. More or less equidistant from both Rome and Naples, its influence from the culinary traditions of Central Italy has been further enhanced by the typical flavours of Sperlonga. The most sought after specialities include fish soup, bean soup, cuttlefish ragù, stuffed sardines and Sperlonga white celery PGI. 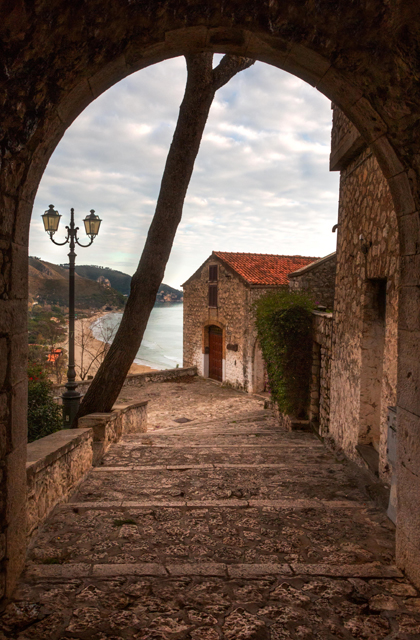