The spring of Minos's followers and the cascade of rocks

Gangi, a land of love and tradition where myth dances in history's embrace

The ancient heart of Sicily beats from the peak of Monte Marone, in the hinterland of the province of Palermo.
On one side it dominates the botanical paradise of the Madonie Regional Natural Park, and from the other its bird's-eye view extends across vast swathes of sun-scorched wheat fields.
It was while they were in search of Daedalus that Minos's followers settled in Gangi, the place "with the spring", from which the mythical town of Engyon takes its name. The connection with Crete is evident from the municipal coat of arms, depicting the Minotaur drinking from a spring.
But Gangi also exudes a strong Medieval aura thanks to its architecture, to the complexity of passages entwined amongst narrow lanes of stone houses, to its grey and green stone colours, and to its fragrances that are reminiscent of distant traditions of country life.
The urban setting provides a charming backdrop for a stroll that winds its way from the castle all the way down to visit the San Nicolò Church, the Corte dei Giurati, the Ventimiglia Tower, the Palazzo Bongiorno, the old headquarters of the Accademia degli Industriosi, finishing with the ancient Santuario dello Spirito Santo, beautifully adorned in the Baroque style.
Viewed from a distance, with Etna in the background, Gangi's houses look like a cascade of rocks tumbling into the valley.

Gangi has a special dish for every celebration. During Easter it's tradition to prepare “u fasciddatu”, a decorated hard dough bread; on Saint Isidoro day it's time to eat Taralli crackers with fresh milk straight from the cow; for Christmas there's “cucchia”, a sweet pastry cake filled with almonds, sultanas and dried figs; during the grape harvest you can try “mastazzola” made with boiled must; and when the Indian figs are in season, their juice makes the “mastacuttè” sweet biscuits. 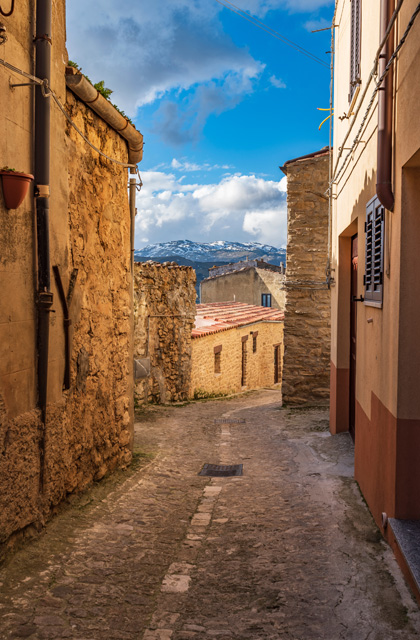