Trapani, a slow journey through time

Crucible of ancient civilizations and cultures

Capital of the province that bears the same name and that covers the north-western tip of Sicily, Trapani rises above a narrow strip of land stretching into the Tyrrhenian Sea on a belt of coastline where long sandy beaches alternate with tall, precipitous sea stacks. With its characteristic sickle-like shape, from which it gets its Latin name, Trapani is a city that boasts thousands of years of history. Founded by the Elymians around the 10th century B.C., it was a Carthaginian, a Roman and then an Arab stronghold before returning to the control of western powers during the Middle Ages to become one of the Mediterranean's most important ports. The city centre retains many traces of these ancient peoples, from Arab influences in the Jewish quarter to the Spanish style of the Ligny Tower, and to the Gothic and Medieval character of the numerous castles. But it's the Sicilian Baroque style churches and buildings that underline the opulence that this city enjoyed during the 17th and 18th centuries and that give it its current charm and elegance. Trapani is an important focal point for a territory that's bewilderingly rich in historical treasures. The inland areas host some of Europe's best preserved archaeological sites, such as Segesta, Selinunte and the Phoenician city of Motya. Located close to the city centre are the remains of the ancient Cyclopean walls that frame Monte Erice and the village that shares its name, from where a breathtaking view of the city and the sea can be admired, with the Aegadian islands and Pantelleria providing the backdrop.

Naturally, Trapani's cuisine is inextricably linked with the sea, influenced by the peoples and cultures that have dominated the city as well as those of neighbouring cities and regions. Of the area's myriad specialities, tuna fish and North African-influenced couscous are particularly noteworthy. Desserts like cannoli with ricotta and cassata (ricotta-layered sponge cake), as well as the local wines, are also well worth a mention. 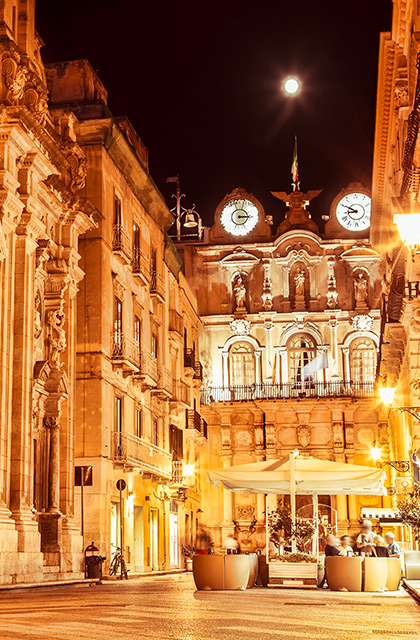