Nestled among the Umbrian hills, Trevi, a village suspended in the greenery of olive groves.

Located between Foligno and Spoleto, on Monte Serrano in Umbria's green countryside, a snail shaped coil rises towards the sky. This is Trevi, a magnificent village perched on all sides of a small hill, an arrangement which gives the village its quirky concentric-circle structure. Trevi's rich history makes it an absolute must to visit and discover: its buildings date back to the Umbri, however the village's current architecture is strongly influenced by the Roman domination, a perfect example being the old fortified walls which date back to the 1st century BC, and onto which the Medieval walls were subsequently built, those which now embrace a historic centre full of churches and
buildings. Interspersed among its alleyways, beautiful churches, brick-built
houses adorned with flowers and aristocratic mansions are among the treasures to be admired. The heart of the village is Piazza Mazzini, which is overlooked by the Palazzo Comunale (Town Hall) and its Torre Civica (Civic Clock Tower), both dating back to the 13th century. Another unmissable gem is the Santuario della Madonna delle Lacrime (Our Lady of Tears) the name of which derives from a miraculous event in which a painting of the Virgin Mary allegedly wept.

An olive oil town listed as one of the "Slow Cities", Trevi is a village that is rich in unique flavours. Here you can savour black celery which, combined with the renowned olive oil, is the principal ingredient of "cazzimpero", the local name for the dish of celery dressed with olive oil, salt and pepper. Traditional local produce also includes pork sausages and cured meats, cheese and honey, all of which can be enjoyed with a lovely glass of Trebbiano wine. 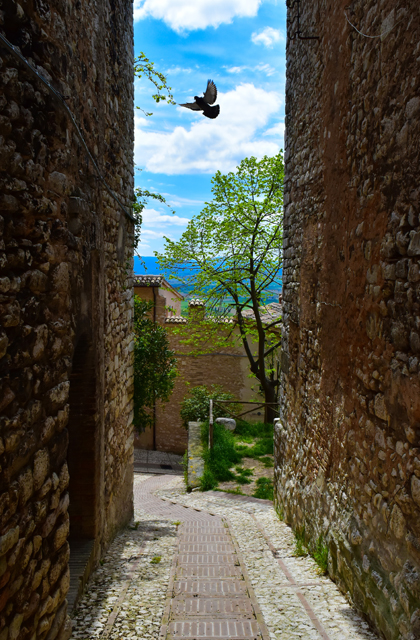